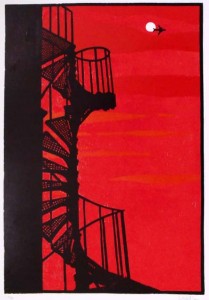 It was while studying for a BA(hons) at Manchester          Polytechnic that Susan was introduced to the engaging mediums of etching and lithography and the transformative processes of printmaking.  Working from drawings made on site, work is developed into woodcuts, drypoints and also paintings.

After moving to London she did a further printmaking course at Falmouth with Maggie Jennings, later studying with master etcher Frank Connolly at the City Lit.

She started exhibiting her prints and subsequently had an etching selected for the Royal Society of British Artists Annual Exhibition at the Mall Galleries in 1993.

In 1997 paintings were selected for ‘new labour’, an exhibition curated by Peter Kennard, at Riverside Studios, London W6, with The Riverside Artists Group.

She studied MA Fine Art printmaking at Wimbledon School of Art graduating in 2000.  Work is typically bold dramatic woodcuts of architecture and landscapes.

Work is included in Publications: